Microsoft announced the first major Update to Windows Holographic which has brought a plethora of new features. But most of the added features are very basic and have been added based on the demand of users received through feedback system. Microsoft also wrote that the Redmond based tech giant is interested in checking what developers are doing with the device which ranges from improving tasks like ordering dinner, to assisting pathfinding and reinventing shopping. 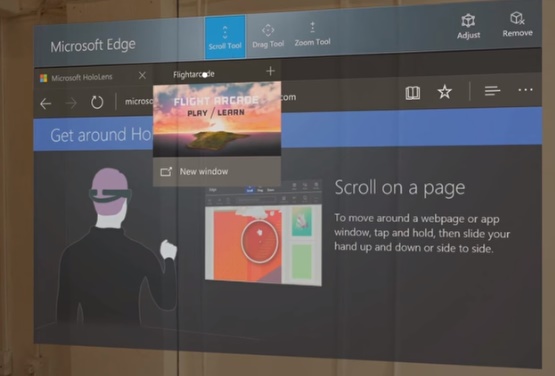 Multi-tasking – With this update, you can run multiple applications at the same time.
Input – You can now connect a regular Bluetooth mouse to your HoloLens device. In addition, the clicker has been fine-tuned to enable resizing and moving of holograms.
Voice – We’ve added new commands. Find out what happens when you gaze at a hologram and say “Face me!”
Edge – Edge now supports many of your feature requests such as tabs.
Photos – The Photos app has been updated to support pinning of pictures without any borders or chrome. Your walls will never look the same.

Microsoft HoloLens is powered by Windows Holographic but other OEMs can license Windows Holographic to make their own device. The Development Edition for HoloLens began shipment two months ago. The second lot of the devices are shipping now and three more waves are there in which the devices will be launched. The Consumer version is expected to launch very soon.

Check out the full documentation of Windows Holographic: