Microsoft held a big event on 21st January 2015 for unfolding the next chapter of Windows 10. There were so many conjectures making rounds till the event. As there was assurance that all Windows 7 and Windows 8 and 8.1 users will get Windows 10 update, there was confusion regarding Windows 10 Technical preview for Phones. Microsoft confirmed that Windows 10 technical preview for phones will be arriving but not as early as Windows 10 Preview versions of desktop. The company clearly mentioned the due time as February 2015. 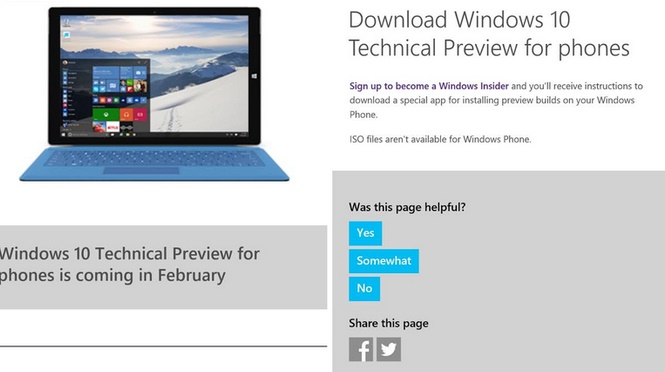 The Windows Insider program for Windows Phones will look similar to the above screenshot. Microsoft presented a copious numbers of features, updates and news for users. Microsoft said that most Lumia which has Windows Phone 8.1 will be upgraded to Windows 10. On the other hands the company assured that Windows 7/8.1 users will get the new update. Microsoft had showed glimpses of the upcoming features of Windows 10 Technical preview for phones. Skype will come in-built and Microsoft is trying to consolidate social networking services like Messaging, Skype and others altogether.

The season was utilized by Microsoft in a fecund way. It has unveiled the Hololens VR Headset which promises to create phenomenal next generation computing environment.