Build 9879 for Windows 10 Technical preview is out now and you can download it. To install the new build, open the Start Menu, got to Change PC Settings and go to Update and Recovery. Then tap on Preview Builds. you can easily check the downloads and install them accordingly. 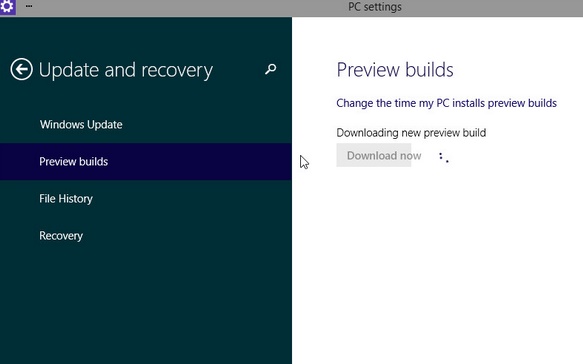 The new build has brought the options to enable or disable Task View (Virtual Desktops), Search option. The new build will also enable you to minimize and restore animations, exclusion of 3 dots Modern design which symbolized extended options. Microsoft is trying to incorporate every possible way to enhance user friendly experience. hence the 3 dots will be replaced by with a three horizontal line ‘hamburger-style’ button. Some more system stabilization and bug fixings have been accomplished.

In some cases you may get a black screen when trying to log-in or unlock. The only option is to hold the power button to hard reboot.
You will be unable to connect to Distributed File System network locations.
Some systems may see disk growth of 20GB+ due to driver install duplication. On systems with low disk space this can block setup and cause a rollback to the previous build.
Skype calls will disconnect and Music will stop playing if those apps are minimized.
There are several known issues with screen sharing with Lync.

The company say,”as with the last build, you’re getting hot-off-the-presses code which means there are a few issues”.