PC and mobile phone screen backlight plays a vital role in affecting our eyes. The blue color, usually present in the backlight, tends to stimulate our brain to such an extent that the brain remains excited. This refrains us from sleeping and we remain glued to the gadgets. Owing to the conscience for health and curb the growing menace, developers had started making apps, and features that could add a warm tone to the screen. Last year, Apple removed all such apps from App Store and themselves incorporated the feature in their OS. It was called Flux. Microsoft has now followed the same path by introducing a similar feature. This feature reduces the stimulant blue color and changes the hue to a warmer tone. This filter is soothing to the eyes and thus sleep will not be interrupted. The feature is available Windows Insider program running build 15007.

There is no definite term coined by Microsoft. It’s just a setting in Display that lets you dim the blue light. Check out the steps below:

Steps To Tint Your Screen A Warmer Color In Windows 10

1. Open the Start Menu and go to Settings.

2. Go to System and then Display. 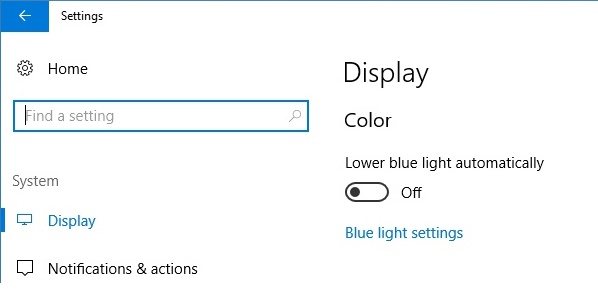 3. You will find there are two settings of blue light. You have two ways to turn on Blue Light settings either manually or on schedule.Scheduling means turning on the warm screen settings at a specific time. There is an option called ‘Lower Blue light automatically’. Tap on the slider below to turn it ON/OFF. Now, there is another option called ‘Blue Light Settings’. The Blue light settings screen, there is a slider called ‘Color temperature at night’. Use it to set the intensity of the tint. Click the ‘Turn On now’ button to enable it. Once enabled, the button will read ‘Turn off now’ so that you can disable the tint. 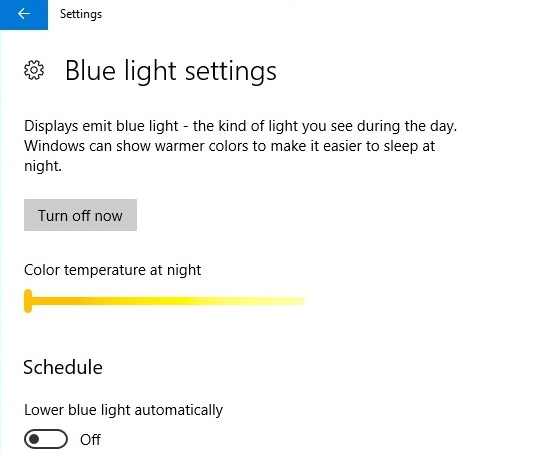 4. You can set scheduled time to turn ON/OFF the feature.