Surface Pro 3 tablet of Microsoft comes with all the excellence and great features that your expect from a high end tablet computer. The best part of this is the pen. But a feature that may initially disappoint you is the absence of a suitable silo in the device to garage your pen. Despite being an important part of the tablet there is no proper place to keep the pen. There is a reason given by Microsoft in support of this. 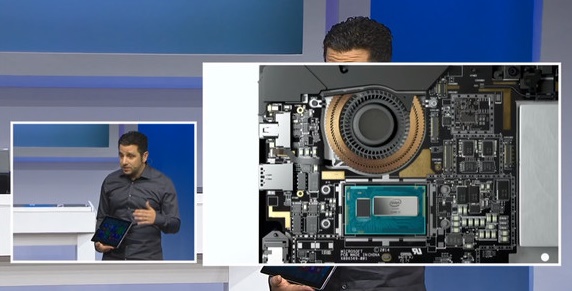 The stand out feature of Surface Pro 3 is its ultra slick body and the pen on the other hand is a full sized one facilitated by three buttons. The pen is made of high quality metal exterior and has the beauty and fullness. Due to this disparity in their width, the device and the pen could not be coupled together. To make your understanding more clear, the pen is 9.5mm-thick and the Pro 3 is 7.62mm-thick. So it’s quite obvious that fitting these two would either lead to thickening of the entire tablet or an odd thick case at the side. So both would nothing but become a reason of repulsion.

Hence Microsoft preferred not to keep the pen garage keeping in mind the minimal and slim body of the Surface Pro 3, that seems to be the defining factor of the gadget. But if you need to travel with it Microsoft created a loop that can be attached to the Type keyboards to carry the pen in it. But the loop lacks security as every time you detach from the felt backing, the tape used to hold the pen gradually loses adhesion and the to hold it degrades. The loop can be replaced. Each loop costs $4.99. But this is not a concrete solution.