After Windows 8 release, many Win users were not satisfied due to removal of Start Button from new version! However, to bit happiness of Users, Win 10 will be having Start10, a popular application from Stardock for Windows 10, but the menu will not look or behave the same exact way like it did on Windows 7. 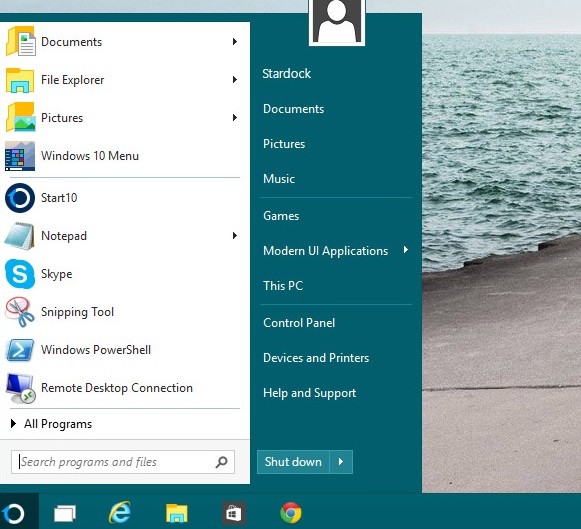 “This first build of Start10 is an evolution of Start8 with more access to Universal (modern/metro) apps and a UX that matches Windows 10. But as we go forward, we will be integrating more features unique to Windows 10 into it.”
– Brad Wardell, Start10 creator.

This time around, Stardock is making it easy to once again use a Windows 7 style Start menu with Windows 10. The app allows you to take full control of your desktop and will also allow you to remove the Start button on the desktop too. You can also select the icon size inside the menu, show or hide user pictures and a bunch of other options to customize the menu to your liking. Start10 gives you a closer look and feel to what Windows 7 offered with more options too.

However, it is mainly believed to have been built for desktop users and not for touch-enabled devices like tablets. With Windows 8, Microsoft at first eliminated the Start menu. This was a big problem for both consumers and enterprise customers who wanted a quick, obvious way to get to their documents, images, most used apps and search. Thankfully, Microsoft added the Start button back in Windows 8.1 but it just took users to the start screen which, again, was non-ideal for users to get to their stuff on a desktop.

The final version of Start10 is expected to be a superset of the Windows 10 start menu but have sufficient customization options to make it work like the traditional Start menu that our enterprise customers are looking for or a hybrid that matches the preferences of power users. The beta is only open to those with an existing/active object desktop subscription; a true open public beta has not been announced at this time. If you want to try out the beta now, you can learn more here.