Windows supports several sleep states which are listed below. Each of these states is characterized by the amount of power consumed by the state, software resumption, hardware latency and system hardware context.

Power state- Working
ACPI state- S0
Description-  Hardware components that are not in use can save power by entering a lower power state. Here, the system is fully usable.

Power consumption
In this case, power consumption is Maximum. However, the power state of individual devices can change dynamically as power conservation takes place on a per-device basis. Unused devices can be powered down and powered up as needed.
Software resumption
Not applicable.
Hardware latency
None.
System hardware context
All context is retained.

Power state- Sleep
ACPI state- S0 Low power idle
Description- Some SoC systems support a low-power idle state known as Modern Standby. In this state, the system can very quickly switch from a low-power state to high-power state, so that it can respond quickly to hardware and network events. Systems that support Modern Standby do not use S1-S3.

In these states (S1-S3), volatile memory is kept refreshed to maintain the system state. Some components remain powered so the computer can wake from input from the keyboard, LAN, or a USB device.

S1 Power consumption
Less consumption than in S0 and greater than in the other sleep states. Processor clock is off and bus clocks are stopped.
S1 Software resumption
Control restarts where it left off.
S1 Hardware latency
Typically no more than two seconds.
S1 System hardware context
All context retained and maintained by hardware.

S2 Power consumption
Less consumption than in state S1 and greater than in S3. Processor is off. Bus clocks are stopped; some buses might lose power.
S2 Software resumption
After wake-up, control starts from the processor’s reset vector.
S2 Hardware latency
Two seconds or more; greater than or equal to the latency for S1.
S2 System hardware context
CPU context and system cache contents are lost.

S3 Power consumption
Less consumption than in state S2. Processor is off and some chips on the motherboard also might be off.
S3 Software resumption
After the wake-up event, control starts from the processor’s reset vector.
S3 Hardware latency
Almost indistinguishable from S2.
S3 System hardware context
Only system memory is retained. CPU context, cache contents, and chipset context are lost.

Power state- Hibernate
ACPI state- S4
Description- The system appears to be off. Power consumption is reduced to the lowest level. The system saves the contents of volatile memory to a hibernation file to preserve system state. Some components remain powered so the computer can wake from input from the keyboard, LAN, or a USB device. The working context can be restored if it is stored on nonvolatile media.

Fast startup is where the user is logged off before the hibernation file is created. This allows for a smaller hibernation file, more appropriate for systems with less storage capabilities.

Power consumption
Off, except for trickle current to the power button and similar devices.
Software resumption
System restarts from the saved hibernate file. If the hibernate file cannot be loaded, rebooting is required. Reconfiguring the hardware while the system is in the S4 state might result in changes that prevent the hibernate file from loading correctly.
Hardware latency
Long and undefined. Only physical interaction returns the system to the working state. Such interaction might include the user pressing the ON switch or, if the appropriate hardware is present and wake-up is enabled, an incoming ring for the modem or activity on a LAN. The machine can also awaken from a resume timer if the hardware supports it.
System hardware context
None retained in hardware. The system writes an image of memory in the hibernate file before powering down. When the operating system is loaded, it reads this file and jumps to its previous location.

Power state- Soft Off
ACPI state- S5
Description- The system appears to be off. This state is comprised of a full shutdown and boot cycle.

Power consumption
Off, except for trickle current to devices such as the power button.
Software resumption
Boot is required upon awakening.
Hardware latency
Long and undefined. Only physical interaction, such as the user pressing the ON switch, returns the system to the working state. The BIOS can also awaken from a resume timer if the system is so configured.
System hardware context
None retained.

Power state- Mechanical Off
ACPI state- G3
Description- The system is completely off and consumes no power. The system returns to the working state only after a full reboot. 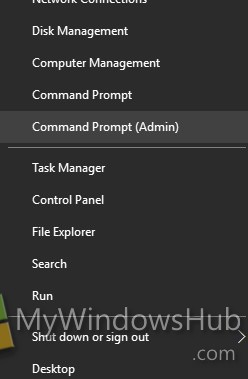 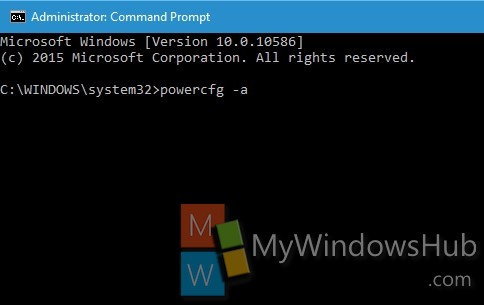 3. You will get a list of all sleep modes available on your PC. 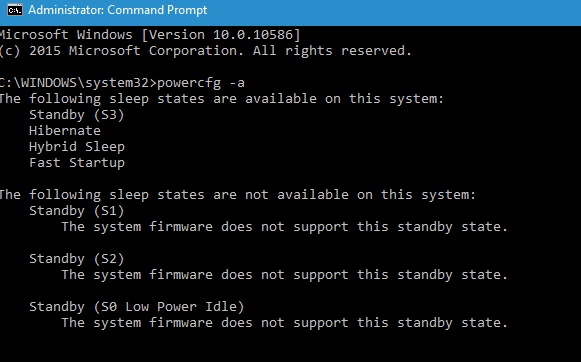 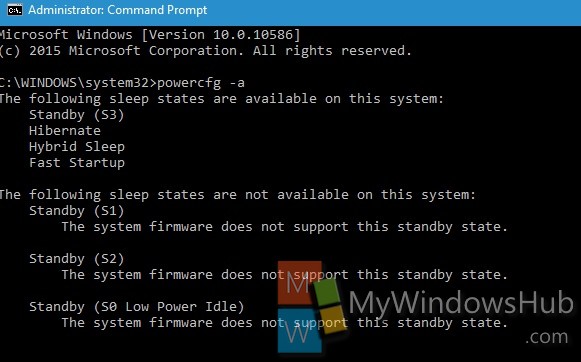