An application called MyCortana helps Windows 10 users to change ‘Hey Cortana’ term to invoke Cortana. Users can address Cortana with different names and different terms. MyCortana doesn’t make UI changes, but back-end functional ones. The search option works pretty good and once you have called Cortana, you can provide all functions and commands as you wish. 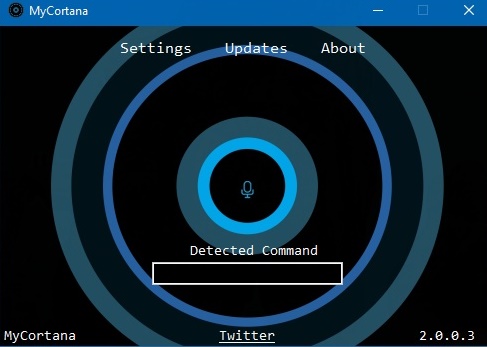 1. First of all, Download and run MyCortana. The User interface is easy to use and can be understood by everybody. Next, click on Settings if you want to configure a new name and phrase for Cortana. The Settings menu is ,located at the top of the App screen.

2. Next, the Settings screen will display and you will see that the menu is nothing but a list of commands for Cortana. Now, click on the plus button to add a new command. What you need to do is add a command and append it to the new name you want to give Cortana. For example, if you want to rename Cortana to ‘xyz’, want want to command to be Hey xyz, then type the following command.

Again if you wish to change the way you want to invoke Cortana, for e.g. Hello instead of Hey, then simply type the command:
‘Hello Cortana’

In this way, you can alter the phrases as many times you want. Once you’ve configured the new name and phrase, minimize the app and allow it to run in the system tray. You can refer to any one of the terms to address Cortana.

How To Enable Enhanced Search

How To Change The Frequency Of Clearing Recycle Bin Files on...

How to turn off Offer to Save Passwords in Microsoft Edge?

How to Change your Mouse Pointers in Windows 10?