Since the advent of Windows 8, Microsoft has added a Share feature that allows contextual sharing of files and contents. Whenever you open a file that is eligible for sharing, the Share option will be there. If you click on the Share button, the Share menu pops up on the right side of the screen. A number of apps appear on the menu and you can choose from them.You can even look for an app from the Windows Store. As you keep on sharing items via the Share option. Windows chooses a list of top apps based on your selection and their suggestions. You cannot edit these apps, and the list will be added whenever you install a relevant application. What Windows does, is managing the most popular apps on the top of the list. 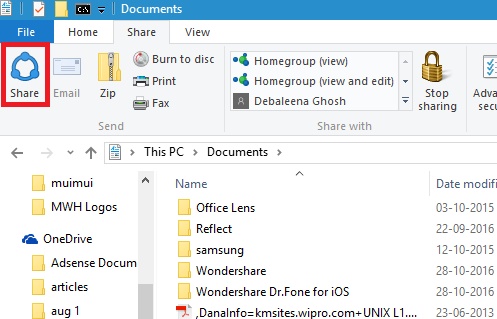 1.If you want to remove suggested apps from the Share menu in Windows 10, then first open File Explorer.

3. the apps that will appear on the list are the ones, that are already installed on your computer and can be used for sharing.

4. There will be some apps with an Install message under them. These apps are called Suggested apps. If you tap on a suggested app, you will be redirected to Windows Store app product page.