Microsoft is going to introduce many new features in Windows 8.1 like customization of Start Screen, Tiles, Search option, user interface to support multiple applications in a single screen, Assigned Access mode of operation and a wide variety of changes. At the same time beside blending and mixing various new technologies with the existing ones, it has also planned to boost up some internal technology and ReFs Support is one of them. ReFs support is introducing performance improvement of the system. The new version is believed to have a good compatibility and support for the Refs file system which has been a part of Windows Server 2012.

What is ReFs File Support in Windows 8.1?

ReFs is the acronym for Resilient File System which is code named as Protogon. This file support was first introduced back in 2012 with Windows Server 2012 which is a file system that is based on the NTFS Technology or better to say to improve the performance of NTFS technology. All these improvisations have been observed in the leaked builds and hence, whether the official versions is going to have ReFs is still not confirmed and is only answerable with time. But, whatever, ReFs support aims to provide stability, reliability and some additional encryption like BitLocker, Access Control List etc. 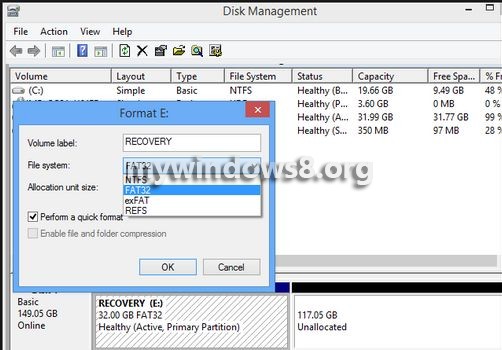 Let us look at some salient features of ReFs:

2. Use of B+ tress for all on-structures. Such on-disk structures include metadata and file data.

4. ReFs allows large scalability with unlimited file and directory size except for restrictions on hardware size.

5. The number of files in a directory are limited by 64 bit numbers that translates the maximum file size to the order of Exabytes.

6. There is a hierarchical allocator that allocates separate tables of diifferent sized chunks of data.

7. ReFs is compatible with existing APIs. This means that it does not require any new system and can easily be blended with existing APIs and NTFS features like BitLocker Encryption, Access Control Lists, symbolic links, mount points, re-parse points, USN journals, file IDs etc.

10. Built in resilience.
ReFs support may not be a matter of interest to users, but this feature cannot be ignored just like that, as it improves the underlying technology and structure that provides the framework of a fast, reliable and stable operating system.