Charms bar is a narrow strip which contains the most important fundamental functions of Windows operating system Search, Share, Start, Devices and Settings. Charms Bar first made its inception with Windows 8 and received severe vituperation from users. Most users found it very difficult to handle the Charms Bar, which then used to pop up whenever your finger or cursor reached at the right corner of the desktop. Hence Charms Bar, even though very useful could not receive universal acceptance and had to undergo several stages of evolution. Finally Windows 10 brought a lot of updates with the UI. The Charms bar do not pop up automatically by default. You can change the settings of the Charms bar also. The following tutorial will help you to access the Charms Bar and the article will be useful for the new users of both Windows 8 and Windows 10.

1. Press Windows + C. The Charms Bar will appear at the right side of the desktop. It’s no more valid in final versions of Windows 10.

2. You can go to each of the options available in the Charms bar by several shortcuts. The shortcuts are listed below:
Search/Corana: Windows + Q

3. Another way you can hover to the same options. Press Windows key to open Start menu and tap PC Settings. Tap on the icon with three dashes at the top left corner of desktop. The same options will appear. It’s not there in final versions of Windows 10. 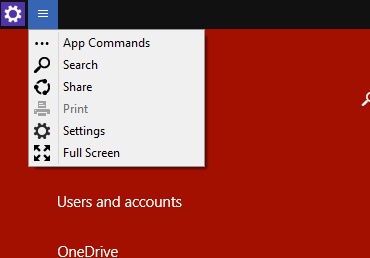