Following the launch of Windows 8.1 Developer Preview for phones and the Windows Insider Program for Windows 10 last year, it’s quite clear that Microsoft wants it’s “two million Windows Insiders” and other users to help shape the next version of Windows. This has prompted thousands of people to create concepts of what they believe could be the perfect version of the OS. 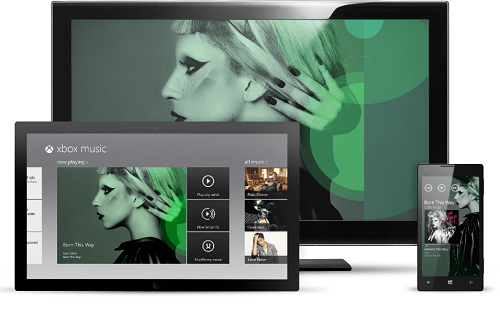 Xbox Music app found on Windows Phone 8.1 and Windows 10 has been on receiving end of criticism. The app which has a 3.6/5 rating in the US Windows Phone Store and has been the subject of criticism for quite some time.UX Designer Sudeep Phase – the same person who showcased a beautiful Office 365 for Android concept, has created another vibrant and intriguing abstraction for what is believed could be the replacement for the current and rather disappointing Xbox Music app.

The Xbox Music app concept follows a distinct purple theme which looks beautiful on a dark background. The UI appears to be consistent on both the Windows 10 desktop and Windows 10 for phones. The redesign also features a new set of icons which are different from the current ones but their actions are quite clear even at first sight. The home page of the app has gone through a complete revamp and new categories can be seen in the settings which include:

The design looks responsive on the phone as well with albums, artists, tracks and folders visible in the upper menu tab. Emphasis has been laid on the fact of how the UI is consistent across all Windows devices. The same settings and menus can be seen in the Windows 10 for desktop image above as well. Another interesting feature the concept explores is the app’s social potential. The concept features a control that allows you to “share music with friends”, an attribute which will let users to easily see what music their friends are listening to, hence allowing people to discover new music, follow their friend’s music interests and then of course, social interaction.
The menu tabs do look remarkably similar to the ones found in the Calculator app for Windows 10 for phones. If you’d like to make your voice heard and influence the future of the OS, make sure to vote on User Voice and get involved with the community in our 175+ page thread on Windows 10 Technical Preview which you can view and participate in here.