Once upon a time Mozilla announced that it has a plan to launch the beta version of the Touch Friendly Firefox browser but two years have passed and no such version was released. Due to unknown reasons the launch was delayed. But few days back Mozilla finally talked about full public beta version and named it as Firefox Metro. The reason behind this name is because this version is compatible to the touch interface of the new versions of Windows. Mozilla said that it has been “optimized for Microsoft’s Windows 8 Modern UI”. 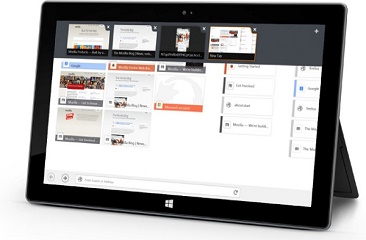 Metro Firefox has a Firefox Start Screen that supports touch gestures, pin to zoom and “one touch swipe transitions. It also provides the list of top sites , bookmarks and browser history. Overall it has a lot of similarities in structure like that of IE 11. Besides all the above mentioned features, it gives full compatibility to the Windows 8.x interface like functionality of Charms bar, sharing of web pages by Mail, People and other Microsoft sharing apps.

Firefox for Windows 8 Touch Beta can be downloaded from Mozilla website. However the full version is to released in March 2014, possibly March 18.