Recently Microsoft has announced that system’s Windows 10 will include phone companion app that will help whatever smartphone customer use — Windows Phone, Android, or iOS to easily setup and sync with their Windows 10 PC. Whether the devices are Windows, Android or iOS based, the app works with all kinds of hardware! This Phone companion is expected to be in Microsoft RTM by 29th July! With introduction of Companion app, Microsoft has definitely tried for better mobile integration with its PC users. 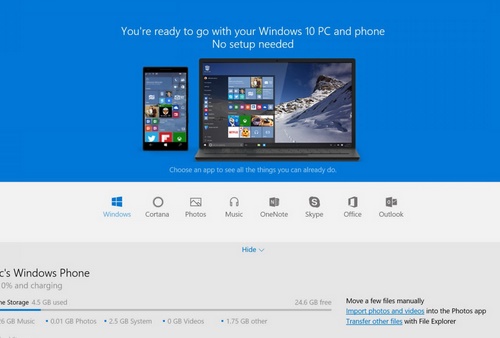 The companion app essentially helps you set-up your phone to make use of Microsoft’s apps to automatically sync your devices to the same cloud accounts for the various products. This should allow for easy sharing and management of documents, photos, music, etc, across a range of devices. When you connect your phone to PC, the Phone Companion app recognizes that a phone has been connected, and will show detailed information about your phones storage and battery percentage. Additionally, if your device is a Windows Phone, it will tell you that if you’re using the same Microsoft Account on the phone and PC, then there’s nothing you need to do and Windows is already syncing everything.

For Android/iOS phone, once you download app and open the Phone Companion, you get to choose either Windows, Android or iOS. The app will then help walk you through setting up your new apps on your phone. Backing out before you finish setting up an app will leave the task ‘In progress’ for you to return to later, and apps which are not yet available on a platform are grayed out with ‘Coming Soon’ text within.

Additionally, Microsoft also confirmed that its Cortana digital assistant app will arrive for Android and iOS, having previously only been available for Windows devices. The first version of Cortana for Android is expected to come by 29th June. The app is currently only available on Windows Phone devices and Windows 10 preview PCs, but Microsoft acknowledged that, in order to make it truly competitive, Cortana needs to work on the two mobile platforms that people actually use in significant numbers, Android and iOS.