Rob Morris, this fellow from V_Graph alleged Microsoft for stealing their idea and earning billions leading to deterioration of their business. The interesting part of the incident is that the person filed the case 14 years after Microsoft got the patent in their name. In 1996 V_Graph approached Microsoft with their product named “Web Widgets”. The product claimed to be able to incorporate web content within applications. Microsoft turned down the deal as they did not find the product fruitful. 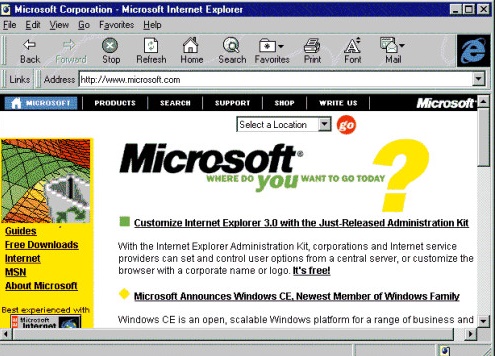 Later on when Microsoft launched Internet Explorer 3.0 V_Beats found uncanny similarities with its own product. Microsoft got a patent on “a web browser control for incorporating web browser functionality into application programs” in 1997. This patent is alleged by Rob Morris to have copied. This patent is one such from which Microsoft earns licensing fees for its use on Android devices.

Morris said,”didn’t think they’d actually get a patent on it, because for a patent you need something novel, and we’d been selling it already for well over a year.” Microsoft charges a hell lot of money from different technologies for this patent. Now he is determined to take action against Microsoft and “Free the browser” campaign is a part of his protest. He also added that his main aim is “to fight [Microsoft’s] bad browser patent” and “to stop them charging for this. Right now, for example, they collect billions of dollars from Android users, with their patent portfolio licensing machine.” He also added,” “this bad patent currently affects every smart phone and tablet user in America today. It was annoying when Microsoft started giving this technology away as part of their operating system, but that only hurt my company. Now, they are making billions licensing their patent portfolio, and it makes us mad to think they are charging Android users for this.”

15 years is a long time though but perhaps Morris genuinely needed this time to furnish the case. He now only hopes to $35,000 to file objection with the US Patent Office. He would require an amount of $250,000 to file the case. He determines to stay in the fight and counter Microsoft’s arguments.