Lumia 435 is an upcoming entry level phone by Microsoft which is on the verge of release. The device is on the verge of release and has already visited the FCC. However we got a glimpse of its appearance and a gist of its rumored specs. Lumia 435 is expected to sport a 4 inch display with 480 x 800 resolution and will be available in several variants. The variants which could be known are RM-1070, RM-1071, RM-1034, RM-1068 and the RM-1032. We also heard that the variants RM-1071 and RM-1034 will be available with dual SIM facilities. 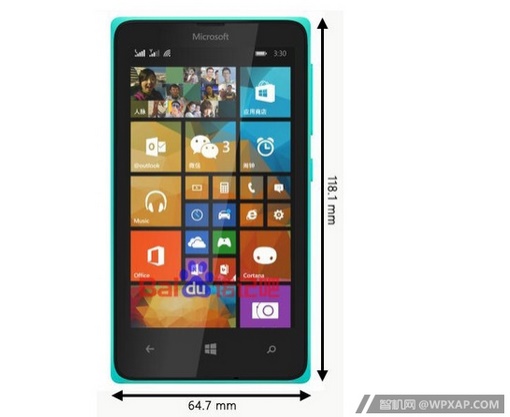 Other specifications include a Snapdragon 200 processor, dimensions are 118.1 mm x 64.7 mm. A decent 5MP rear-facing camera with pixel density works out to 235ppi. There is no take on the rear camera specs. We also heard that Microsoft Lumia 435 will be powered by a BV-5J battery. According to Phone rena, “Indian import-export site Zauba posted last month about two interesting imports into India. One was a shipment of ten BV-5J cells for “inter-company use only.” The same day, a shipment of ten dual SIM smartphones was shipped into India, valued at $57 USD each. Ten unique batteries and the same number of smartphones were shipped into India on the same day. Considering that the batteries are exclusive to the Lumia 435, it sure sounds like the handset has recently been tested in India.”