As the day for Windows 9 launch is approaching we are getting some more leaks on our way which are making us more and more curious. In my last article I gave you an idea of some upcoming UI changes, especially the Start Menu and UI changes. We have also told you about the inclusion of Cortana and Disk Space. This article will focus on the new notification center in Windows 9. The video leaked shows a central notification area which will be a hub for notifications of all kinds. The notification which pops up from the right corner of taskbar is different from what it used to be like. 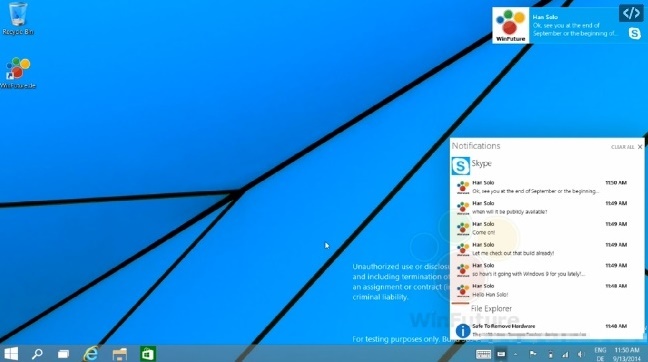 Previously we used to find that there were different notifying areas for Windows. In Windows 8 and 8.1 we saw that when we inserted a USB storage device, or got some notifications from Windows apps, tge notifications used ti pop up at the top right corner of the screen. Action center messages appeared at bottom right, ejecting media, downloading drivers and all these notifications were confined in the right hand side of the taskbar. Now the new leaked video shows that the upcoming version codenamed Windows Threshold will have a common area for notifications and all the updates and alerts will pop up in that are. The image shown above is a screenshot of the leaked video. So be it your Windows apps notifications or any other toast notifications, you won’t need to hover through out your screen in order to get them.

You can watch the video
here

Source and Image via Winfuture