The title is strong enough to make your chin drop in awe and wonder! But yes it’s true that iOS and OS X are the most vulnerable operating systems even beating back Windows. The report was received from GFI. The study included an average of 19 vulnerabilities per day which were being taken for their study. The statistical data submitted by the National Vulnerability Database (NVD) unveiled that as much as 7,038 new security vulnerabilities were added to the NVD database in 2014. 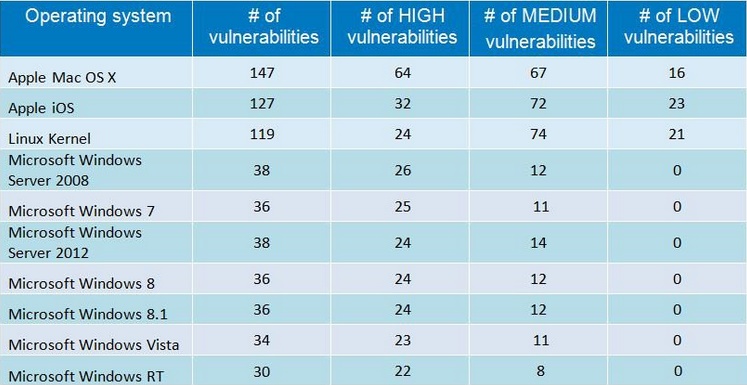 Apple fanboys have always had a special place in their hearts for Apple operating systems because of the ultra strong security. But the study revealed that the most powerful security vulnerabilities were found in OS X and iOS. Even Microsoft suffered a bad record for security threats with Windows Server 2008 having 38 vulnerabilities. Windows 7 had 36 issues and Windows 8 and Windows 8.1 combined with a score of 36, followed by Windows Vista with 34 and lastly Windows RT with 30 vulnerabilities.

It is interesting that although Microsoft operating systems still have a considerable number of vulnerabilities, they are no longer in the top 3. Apple with OS X and iOS is at the top, followed by Linux kernel

, said the GFI. It also added,

2014 was a tough year for Linux users from a security point of view, coupled with the fact that some of the most important security issues of the year were reported for applications that usually run on Linux systems. Heartbleed, for example, is a critical security vulnerability detected in OpenSSL while Shellshock is a vulnerability that affects GNU Bash.

Note: The source of the information is already mentioned below. We have not conduct the survey/study. So if you have any concern or question, check the website mentioned in the Source (GFI, who has conducted the study and published the result).