We have reviewed this software called iCareFone which claims to be a perfect solution for all iOS problems. This software application is a tool for Windows operating system that enables you to recover your iPhone from sudden crashes and other technical faults. Apple iPhones are known for their stability in performance and built. However, there are times when an iOS suffers severe breakdowns owing to new updates and Builds. The situations that can wreck your iPhone temporarily or permanently are iOS’s failure to boot properly, iPhone Stuck on Apple Logo , iOS issues associated with boot loops, iTune errors, app failures, iPhone stuck in DFU Mode, iPhone stuck in recovery mode and so on. So these are some of the terrifying situations that can leave us deserted. iCareFone is the one stop destination for all users who are facing any sort of technical issues with iOS.

The steps of recovering an iPhone stuck in recovery mode or any of the above mentioned loops is easy. All you need is to connect your iOS device to the Windows PC via USB cable and this software.

2. Next, connect your iPhone with the PC via USB cable and click on Fix now. Then a new tab will appear where you need to tap on Start to trigger the process. The software not only recovers the lost data from your iPhone but also undergoes several repair functions like update to the latest iOS version, restore to a non-jailbroken state and lock the phone if it has a passcode set already. 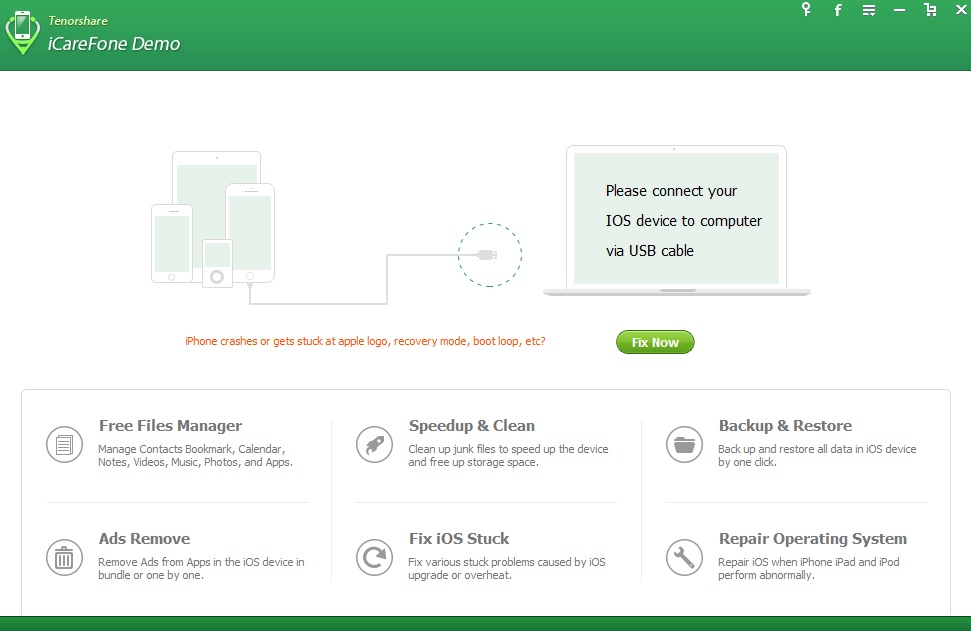 Now, coming to the maintenance part of the software application, it aids much more than just data recovery. It can Fix iOS 10 stuck stuck in Apple logo or any other crash related issue, functions as a File Manager and manages a wide variety of file types like video, Messages, Contacts, Bookmarks, Photos. Apps etc. Next, another function that most users will prefer is the Ad blockage. It blocks advertisements and removes them from your iOS device either in bundle or individually. iCareFone cleans up junk files, frees up space which is very important for the limited space in iOS devices.

The free version has been reviewed here. The paid version of the app contains more functionality and costs $29.95. We shall highly recommend you to try out this software by Tenorshare.