Recently Windows has incorporated a new feature in Windows 10 apps, called Fluent design. The Fluent design is a new look in the User interface of the applications. The fluent design is not just an improvement of the user interface but beyond that. The changes are arriving gradually and are still under process ofdevelopment and evolution. Right now, the feature can just enable or disable transparency effect. The design is already rolling out to Windows 10 users on various stable builds and can be found in applications like Calculator, Groove, and Maps apps. If you do not like the feature, you can disable fluent design in Windows 10 apps.

This feature is present in Windows 10 version 1703 build 15063. It is expected that the design will cover many more apps with newer features in the coming Windows 10 Builds by Fall 2017. It’s been anticipated that once the feature comes in full fledge, there will not be any option to bypass the feature. 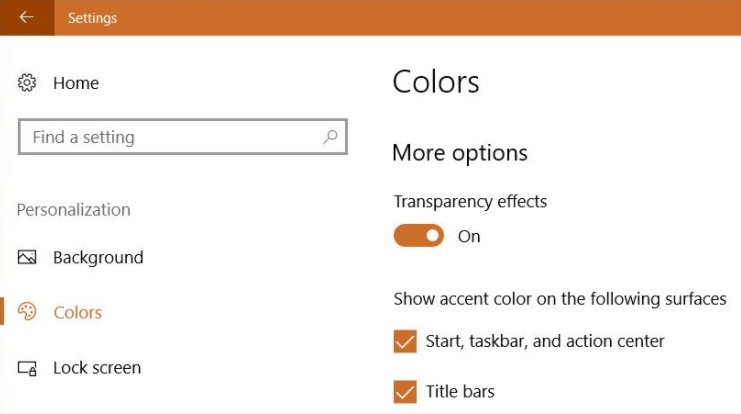 1. Tap on the Start Menu and click on the Settings app.

2. Go to Personalization tab under Settings.

3. Next, on the left panel, click to the Colors tab and scroll down the color presets.

4. In the right panel, you will find an option called ‘Transparency effects’. Turn it off to disable fluent design in Windows 10.

5. You can enable the effect again by moving the slider to the right to turn of the effect.