You must be hearing about Ahmed Mohamed- the boy who was arrested from his High School at Irving, Texas for bringing a self-made clock to school. While the entire world stood in protest for Ahmed Mohamed, Microsoft surprised the boy with a lot of amazing gifts and freebies. 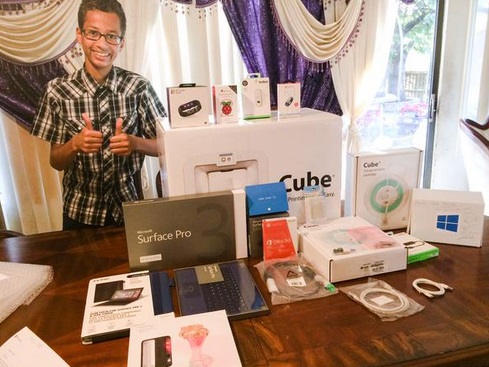 Here’s what Microsoft sent him:
1. Microsoft Surface Pro 3
2. Amazing accessories of all types related to Surface pro 3
3. A Microsoft Band
4. A copy of Office 365 and lots more.

The 14 year old boy Ahmed Mohamed from Irving, Texas is a gadget freak and an innovative mind. He loves playing with gadgets and has fervour for innovating things. He made a clock all by himself and then took it to his school to impress his teacher. But the teacher not only got perplexed but also took at as a threat to the school’s safety. The boy was arrested later at that day by Irving police and then interrogated. The main reason behind his arrest was his religion and his race.

Eminent personalities like POTUS Barack Obama congratulated Ahmed for his innovation. Mark Zuckerberg invited him at his Facebook head quarter workstation. Google Science Fair invited him at their event and so on! Ahmed seems to be very happy with all the love being showered upon him.