Cortana has started exploring the world and it’s started taking footsteps in newer places. However the more experience she’s gathering, the more smarter she’s getting and we were literally dumbfounded at the pun she intended on Android with her six line sarcastic story attacking Android. 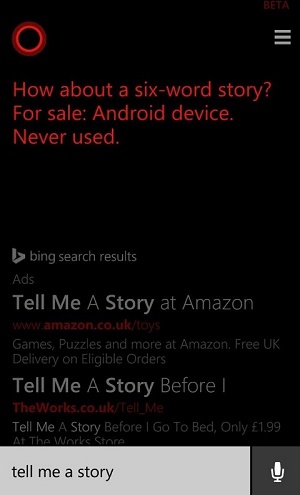 Android is the proud owner of the maximum smartphone market followed by Apple and then Windows Phone and it’s obvious that Cortana will attack its opponent, the Android phone. When asked to tell a story it replied: ” How about a six word story? For sale: Android device. Never used.” It has taken aback a lot of users seeing the aggression of the favorite Cortana. If you want to get thus on your Windows Phone 8.1 device, set the region to United Kingdom and the language to UK English. Cortana is the voice assisted artificial intelligence service that made its appearance first in the Halo game series ans and it’s now a full fledged personal assistant and since then there has been no looking back for Cortana. Cortana is available in Windows Phone 8.1 devices for selective regions only.