Microsoft has had big plans with Bing and it has some serious plans om rebranding the Bing app. The most prominent approach of Microsoft towards promoting Bing is introducing it in rival platforms like Android and iOS. The MSN portal has been revamped and the Bing app suite will be known as MSN apps and will be available on iOS as well as Android. Let’s have a look at what Microsoft has to say on this. 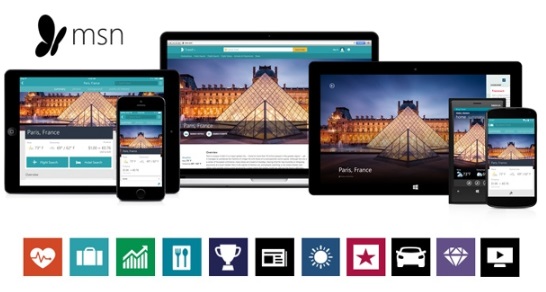 In their official blog Microsoft stated, “In the coming months, we will release a suite of MSN apps across iOS and Android to complement our corresponding Windows and Windows Phone apps. You only need to set your favorites once, and your preferences will be connected across MSN, Cortana, Bing and other Microsoft experiences”. They added, “Whether it is your watchlist of stocks in MSN Money, your favorite sports teams in MSN Sports, or your recipe collections in MSN Food & Drink, those things will always be with you at your PC at work, on your iPad in the living room, or on your Android phone when you are on the go.”

The apps are already incorporated in Windows 8 and Windows Phone operating system but soon Android and iOS users will access ti the Bing app suite. Tell us how you feel about this new approach.