The Association for Computing Machinery’s AMC CHI conference is the world’s premiere conference on human-computer interaction, and this year about 70 Microsoft researchers have presented research results and tools that will take the human-computing interactions to a new dimension. The conference will be held in one of the world’s emerging trends in culture, technology and design, Seoul, Korea. Microsoft is one of the Champion Sponsors, along with Google, Naver and Golfzon etc. 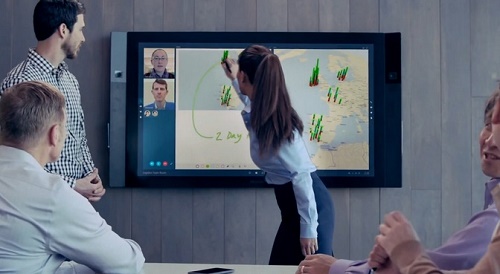 The conference will discuss on Human Factors in Computing Systems and will showcase the advances of making the computing more personal and create an interactive, 3D map of the surroundings and taking care of some distinct needs for students and teachers attending online lectures or a surgeons in operation theaters or any boardroom presentations for the CEOs and the presenters. The businesses, academic scholars, organizations and programmers from all round the world will gather in for the conference.

Let’s see what Microsoft has in store this year for human computing interactions figuring out people’s need and necessity. There includes numerous paper works and research presentations that will be presented at CHI 2015.
Blood Pressure beyond the Clinic: Rethinking a Health Metric for Everyone: Health is the key factor of human life and keeping that on mind, Microsoft have presented a paper at CHI on continuous blood pressure monitoring. This continuous blood pressure monitoring would be an excellent addition to the Microsoft Band. To have a better understand on continuous blood monitoring system, researchers have taken 34 people over a period of 2 weeks and monitored their blood pressures five times a day. Dan Morris, a senior researcher explained that the people are sometimes not conscious about the outcome and sometimes they have same faulty assumptions as the reading goes against their assumption. They sometimes blame excess intake of sodium in food for the cause of hypertension but that might not be the case every time. But considering the anxiousness and self-evaluated clinical interpretations, Microsoft has to drop off the blood pressure measurement feature out of the final product.

Immersive Telepresence Experience Using a Digital White Board: Sometimes we held meetings with people who are hundreds and thousands of miles apart and to give a more personal touch Yinpeng Chen, a senior research software development engineer at Microsoft developed a technology that makes human-computer interaction more personalized. The technology uses SurfaceHubs, huge touch screens that are combined with Microsoft Kinect cameras. The 3D interactive technology gives a feeling that the person is standing next by and even can have virtual handshakes. That is a part of logic behind ImmerseBoard. This makes the boardroom conferences much more interactive and personalized. It’s a very good example of improved technology-based interpersonal communication.

A Community-Moderated Voice Forum in Rural India: The University of Washington along with the researchers at Microsoft presents Sangeet Swara, a voice forum for songs and cultural content. It is an interactive voice forum for curating audio messages for communities in developing regions to share with people in developing using low-end mobile phones.

Industry is changing, and so must we: This is a case study for research practitioners and academicians. Microsoft researchers had a call that curriculum and training in human-computer interaction to reconstruct the skills must evolve to reflect the skills required in today’s software industry.

Interactive 3D mapping and recognition in large outdoor spaces: The Semantic Paintbrush allows the user to paint i.e. to draw with a laser painter and the Microsoft researchers collaborated to produce a map of the 3D environment in real-time.

Thinking through the relations between data and community: Here, in this case, the researchers at Microsoft, University of Nottingham and Newcastle University have surveyed a street and it communities for a year and represented the findings. The work explores how the production and use of data is bound up with a place.
Effect of machine translation in interlingual conversation: Language is the main obstacle for cross lingual interactions and keeping that on mind researchers at Microsoft and University of Maryland studied how people use a prototype translator application and found that they naturally adapt their style of speech to accommodate the technology. Spoken Language Translator can replace the human interpreters and it is less costly to use. The study was conducted with 46 people in total and in two sets.

The digital collection of valuable data and developed a system for classifying what constitutes a digital collection of data. This is an initiative from the researchers at Microsoft and Cardiff University.
A framework for automatically generating interactive tutorials: Framework for interactive tutorials is a system that includes stepwise approach from the researchers at Microsoft, Cornell University and the University of Washington.

It is to improve the visual consistency of slide decks, a collaborative approach from Researchers at Microsoft, the University of Waterloo and the University of Tokyo.
Automatic game progression design through analysis of solution features: An automation system of level progression of a game from the Microsoft researchers, and researchers from Cornell and the University of Washington.
Mudslide: A spatially anchored census of student confusion for online lecture videos: Mudslide, a prototype system that allows students to give online lecturers feedback for the online lecture videos and can comment the lectures what part they were not able to get in context to the slides.

Embedding interactive multimedia exercises in lecture videos: A more interactive online lectures between teachers and students for better evaluation by Microsoft researchers.
Accurate, Robust, and Flexible Real-Time Hand Tracking: Microsoft researchers have developed a system that will help to track people with the hand gestures and hand motions that they make in day to day life, in real time.
Measuring crowdsourcing effort with error-time curves: Researchers at Microsoft and Stanford University have created a data-driven model for figuring out the fair price to pay for crowdsourced jobs such as transcription and search.

“For Telling” the present: Using the Delphi Method to understand personal information management practices: Better systems for managing personal information such as documents and e-mails.
Break it down: A comparison of macro- and microtasks: Breaking up of major tasks into smaller ones. Although the “microtask” system generally took longer, the researchers found that they got higher-quality results.
ModelTracker: Redesigning performance analysis tool for machine learnings: An an interactive and efficient way of displaying machine learning performance while simultaneously supporting direct access to data for inspection and debugging.

Visual regular expressions for querying and exploring event sequences: It is a system for non-programmer so that they can use visual tools to better find and analyze sequences in data sets such as programs or web logs, an initiative by researchers at Microsoft and Brown University.
There are several such interesting interpersonal research works from Microsoft that are presented at CHI, 2015.