Microsoft acquired Nokia’s handset business but that didn’t turn out to be fruitful. Microsoft;s Windows 10 Mobile and Windows Phone couldn’t make a mark of their own. Before the arrival of Windows 10 Mobile Anniversary Update, Microsoft pushed buggy Builds to insiders. Many insiders even complained of their phone being bricked by the Update. With these type of negative feedback, it was obvious that the Windows Phone sale will not show an increasing graph. But it was a shock when the sales took a plummet. 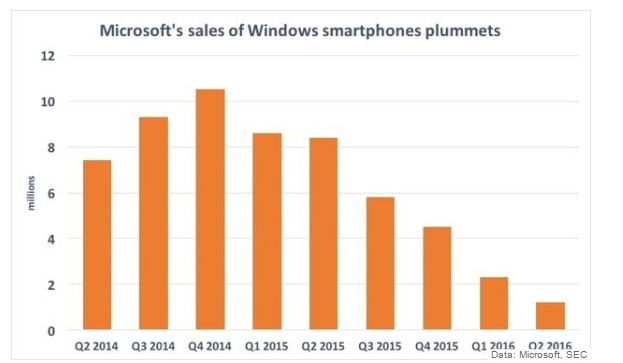 According to researcher Gartner, global sales of Windows-powered smartphones cam down under 2 million units in the month of June. The reports was emphasized by a recent filing og Microsoft with the U.S. Securities & Exchange Commission (SEC). Last month, Microsoft put its smartphone sales at around 1.2 million in the filing. The difference between Gartner’s and Microsoft’s numbers is around 750,000 smartphones.

Microsoft jumped on the bandwagon in order to compete with Apple and Google. Even though Windows Phone operating system managed to remain in the third position after Android and iOS, but the difference between the second and third position is havoc. Microsoft made a grave mistake by taking over Nokia. With a poor app support and unstable operating system Builds, no wonder users chose different devices.