Windows 10 was released to public on July 29. Since many months, Microsoft started rolling out Preview Builds for Windows 10 and Windows Insider played a pivotal role in ameliorating the OS. Now that the latest version of Windows has launched, Microsoft said that it will continue to utilize Windows Insider for the betterment of the operating system. 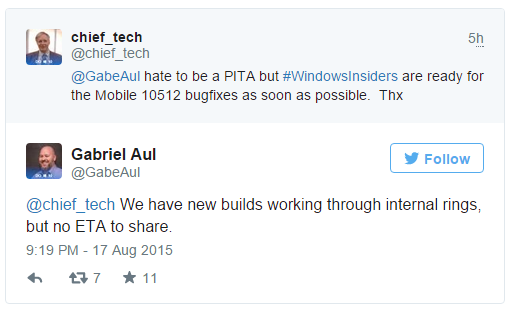 Windows 10 was facing several minor bugs which caused some minor but annoying problems with Windows 10 PC. As a result Microsoft released three back to back Cumulative Updates. Recently, a Twitter user inquired Gabe Aul at his Twitter handle if any new Windows 10 Build is coming. Gabe Aul tweeted back that Microsoft is working on an internal build for improving internal system but no new build will be launched in a day or a two.

The last released Build was the Preview build 10240 and since then no new Build has rolled out. As per reports, Microsoft not yet ready with a new build even though they are working pretty hard on debugging and enhancing the OS. Windows 10 has given a new dimension to the versatility of Windows operating system with special focus on security. Windows 10 will bring a sturdy Defender which will have the capability to even disable pirated softwares and games.