So some users gave feedback to Windows to reduce this operational complexity and consolidate the Control Panel and Settings panel under one name. Unlike Windows 8 and Windows 8.1, the Settings menu of Windows 10 is very extensive, robust and user friendly. The query of two different settings menu were placed on Twitter by several Windows Insiders to which Microsoft’s head of the Insider Program, Gabe Aul, and a Senior Program Manager, Brandon LeBlanc replied with an affirmative thoughts. Both of them agreed upon the fact that two different Settings destination is needless and the disparity is causing nothing but increased complexity in codes.

Brandon LeBlanc replied, “@billybobjoe2211 @GabeAul Settings will eventually supersede Control Panel. Some stuff not moved over. But haven’t had to use CP in months.” 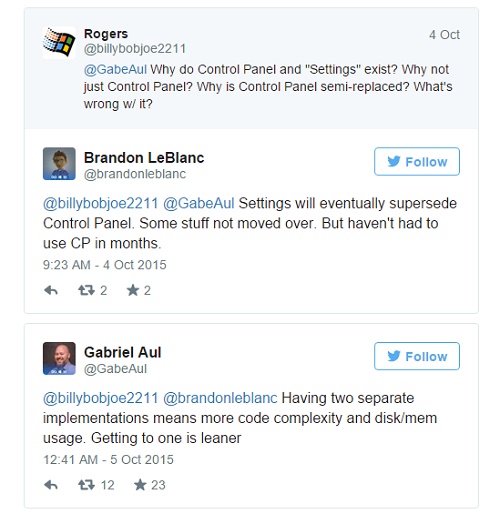 It is clear from the tweets of Gabe Aul and LeBlanc that Windows will soon need to bid farewell to the very old Control Panel.