TAP THE FROG is a new fast phase excellent graphics fun game that will be launched in the Windows Store. A wonderful way of spending leisure hours, this game fasten your heartbeat with its challenge of qualifying levels and competing with your fellow friends in Facebook. 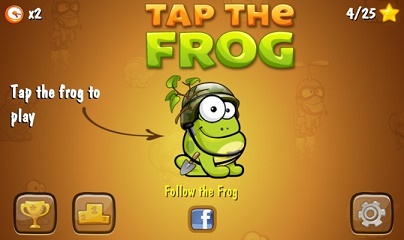 The game can be assumed to be a compact version of 6 mini games that are zipped under the name of a single game. The six versions are Pop the Frog, Paint the Frog, Launch the Frog, Feed the Frog, Treat the Frog and Fight the Frog (two-player game). Each game played by you credits you with a number of stars based on your score and their rules. Now you can unlock the next game only if you have enough stars in your credit. The main essence of this game is testing your promptness, reflex and observation. There is a leaderboard which is activated when you login using Facebook and the Leaderboard updates you with the highest scorer among your friends. The game is interesting, light mood and addictive.

The game was available in the Windows Store but some copyright issue was raised by the Manufacturer PlayFo and will be re-introduced once the issues are met with. Another disadvantage of the game is that once you finish all the levels of the free version you will be asked to get the Pro version and to disappoint you the paid version starts afresh and none of your credits earned in the free version is carried forward. Hence, this accounts for a serious irritation as neither would you want to waste man power and energy to regain the levels nor would you love to be stagnant in that last level of the free version forever. So still a long way to go.