Windows 10 Technical Preview Build 9879 brought the Storage Sense feature few days back. The Storage Sense keeps a thorough track of the files and documents being stored in your computer. Not only does it give an account of the overall storage but lets you choose the locations you want to set for specific apps and files. Build 9789 had many options grayed out. For e.g. You did not get the permission to change locations of apps, games and folders. But in Build 9901 you get a drop down list. Even though in Build 9901 you cannot change the settings but at least the dropdown box is a hint of what you can expect in the final version. 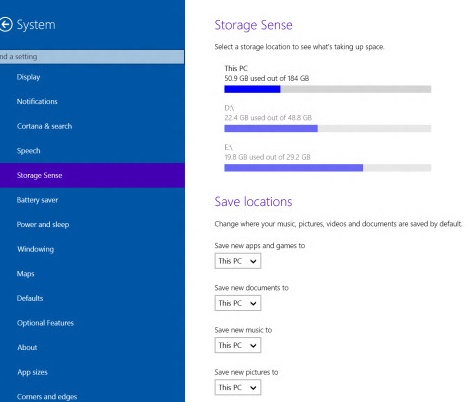 Build 9901 has brought a new save location.settings to Storage Sense which will probably become active in the final build. We have been discussing and sharing all information regarding news and leaks of Windows 10 now Microsoft has called for an event on January 21st 2015. The new event is named to be the next chapter of Windows. So we are expecting all the good features which have been seen through builds and leaks get consolidated into a final sturdy OS.

How Dangerous Is The Pegasus Spyware?