OneNote Text Editor which stuffs unused articles for later use and electronic quick note storage, OneNote has been updates graciously with for Windows 8 and Windows 8.1. The most important feature added is its integrity with charms bar and facilitates capturing and sharing note via the Charms Bar. Some more is there which is discussed in the next few lines 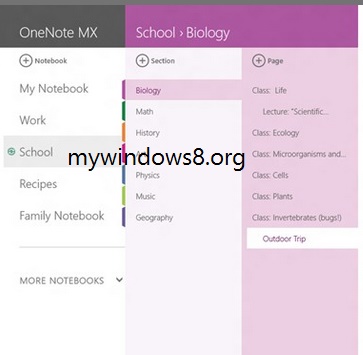 Camera Scan, an extremely useful feature has been added to the list of updated features. The camera scan scans the document and captures a screenshot of the document you want to save. Further cropping rotating and other editing can be performed by OneNote itself. The resulting document looks as good as a scanned document. Now from the scanned document which is generally unreadable textually, the Optical Character Recognition plays its role in determining the texts in the scanned document. OneNote is crafted with unique ink support that lets you quickly make some notes and enjoy reading them at a later time. OneNote has added another feature that’s the full screen mode. The updated version has faced some technical issues, bugs and disorder which are being sorted from time to time. OneNote is downloadable from the Windows Store.