AdDuplex, the recent advertising platform has recently run a survey on the top Windows Phone flagships and Nokia Lumia 920 has won the survey with 13.1% votes. Not only have that most of the remaining votes been bagged by the various version of Lumia.

It’s quite obvious Nokia has been able to understand its customers and has provided satisfactory service to them. The second and third place in the poll sincerely goes to the credit of Nokia Lumia 720 and Lumia 800 and this fact justifies the honesty of Nokia. Windows Phone market has been snatched the Lumia series with its outstanding environment for Windows Operating system and hence Nokia possess the pride to win with unbeatable 83% with Lumia 920 conquering 13.1% alone. AdDuplex is a cross-promotion networking media that mainly aims on Windows Phones and its applications. The survey was done on June 7, 2013 on 701 Windows Phones. The result has been published in a pie chart by AdDuplex as shown below. 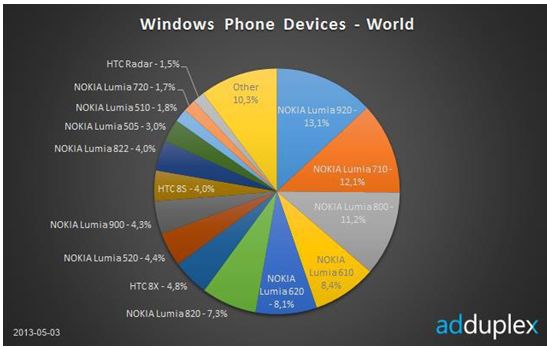 The popularity and demand for Windows phone varies from country to country. France tops the list in respect of market share of Windows Phone 8 with 70%, while Windows Phone 7 is most popular in Mexico with market share of above 95%.Now let us proceed to the market of United States. Lumia 822 is popular in United States with 22% market followed by its close competitor Lumia 920 with 20% share and 16% of market share is occupied by Windows Phone 8X. So it is clear that Nokia tops the list with 66% while HTC holds second position with 26% followed by Samsung with 7%.

For more updates and news on Windows phone, keep visiting our News Section.