According to a leaked slide Amber Update will bring some improvements to Nokia Lumia 520, 620, 720 phones. In a press event in Hong Kong it is confirmed that Nokia will introduce low energy capabilities and support for hardware and accessories. According to BlockJack!’s slide these three Windows Phone 8 will also get Bluetooth 4.0 drivers and FM support with this Amber Update. With Bluetooth 4.0 support, users will able to connect their Windows Phone 8 to various low-energy Bluetooth accessories like smart watches, Fibit etc. Though it is not confirmed when this Amber Update will be available for these phones, but we may expect that Nokia will bring this update before rolling out the windows 8.1 upgrade. 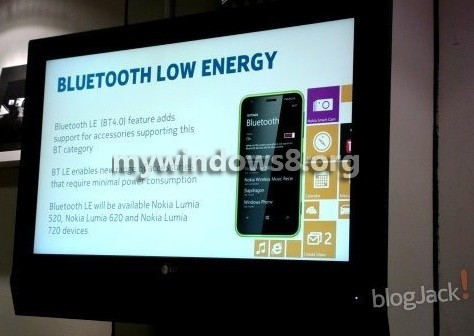 All these devices are powered by Qualcomm’s Snapdragon MSM8227 chipset , which is already ready for Bluetooth 4.0. Because of the unavailability of proper drivers, these devices currently support Bluetooth 3.0.

Apart from all these the Amber Update includes improved battery life, sharp zooming, altering photo temperature, focus timer, glance screen and much more features. So if you are using any of these three phones, you may expect this Amber Update within one or two months. It is not confirmed that whether Lumia 820, 920 and 925 will get this update or not. But it will be a foolish decision if Nokia plans not to bring this update for these high end devices.