You should never make the mistake of deleting the hiberfil.sys file in Windows 8 because you have many reasons to love it. To know why, read the article.

Difference between sleep and hibernation

There has been always confusion between sleep and hibernation. Although both bears the same meaning literally, but technically they have differences. Setting your machine to sleep mode is like pausing your actions for a while and then resuming full-power operation within a short span of time, which ranges from 3-4 seconds. During sleep mode, the computer stops from action, draws little power and puts all the settings in memory. On the other hand, hibernation shuts your computer down and utilizes the least amount of power. A hibernation mode is generally recommended to a laptop user when he/she does not have the facility to charge the laptop and is not using the computer for a while. 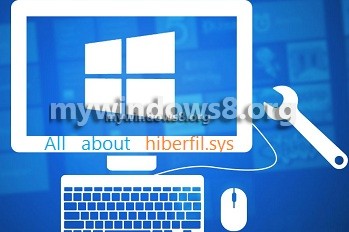 What is hibernation and hiberfil.sys file?

Hibernation literally means going for prolonged sleep. When a computer in in hibernate mode, the operating system aims to keep the computer in the same state where you left it and stores the currently running programs onto the hard disk to provide you the facility to resume your computer without losing any running programs. The OS saves all these information in a file called hiberfil.sys file. This hiberfil.sys is actually a hidden file which is stored in the main partition where your OS is installed. For e.g. when the power of your laptop is turned down, your computers turns off. Actually it goes in the hibernation mode. So when you plug the charger, and turn on the computer you will find that the computer is in the same state as it was before turn off.

Why you should not delete the hiberfil.sys file in Windows 8 ?

Up to Windows 7, there was a time when people wanted to delete the hiberfil.sys file and people like us gave solutions on how to do that. But for Windows 8, deleting the hiberfil.sys file is a big NO. Just have a look at the picture below. It’s actually a survey on startup comparison between Windows 7 and Windows 8 OS running in 30 computers and what the survey revealed is that Windows 8 starts at a quite faster rate than Windows 7. So let me unfold in front of you the underlying reasons. The new fast start up is a hybrid of cold boot and reincarnate from hibernation. When a Windows 7 computer shuts down, the kernel session shuts down but in case of Windows 8, on the stead the kernel session goes to hibernate. So you can understand that resuming a system from hibernate is much easier than a full system initialization. This technology up gradation gives you the advantages of boot times and hence it establishes the need for the hiberfil.sys file. If you delete it, you can save memory but the kernel session will have no place to be stored and hence startup will be delayed. Therefore the first and foremost reason to keep your hibefil.sys is to start your computer fast.

Another new technology incorporated in Windows 8 operating system is that Windows 8 has the ability to resume the machine in multiple phases especially in laptops or computers that have multiple core processors by simultaneously using all the cores along with reading and decompressing the contents of the hiberfil.sys file.

Windows 8 on its advent did not get the response as expected. Actually it got mixed responses because the Windows 8 Start screen, the concept of charms bar were all new to the users of most of the world. Still a person cannot ignore the features that came with it, which is not just a feature but a gift.
Take the example of the startup times. Microsoft made a prolonged survey just on this domain and found out that most of the users suffer from the impatience of the slow startup and slow shut down of Windows. Another thrust was also a result of the survey which discover that maximum people prefers shut down than hibernate or sleep. It’s actually a common psychology to get satisfied with shutdown which gives us the feeling that yes! Our machine is off and it can suffer no harm and no power will be utilized. It was then Microsoft thought why not blends shut down and hibernate and make things easy for people? The fast start up and shut down is a result of this. It not only makes the system performance fast, but also makes a fresh start.

Some more information on hiberfil.sys file

How much memory does the hiberfil.sys file occupy?

Generally the hibersys.fil occupies almost as big as 75% of the storage space of RAM of your computer. Yet the excellent fast start up is worth the occupancy. You can also customize the memory allotted for hiberfil.sys file in your RAM.

If you have by mistaken turned off hibernation, if you want to turn it back, open the elevated Command Prompt and type the following command powercfg /h on and press Enter.

Still if you are badly in need for some memory, turn it off for a while. Type the command powercfg /h off.