Windows Ink is the new ameliorated version of Microsoft’s Pen support. As Microsoft says, this thing is the future of pen technology. Windows Ink was teased at the Build 2016 conference held in San Francisco and if reports are to be believed, this is the first time that the Redmond based Corporate has evolved the pen support with utmost dedication. The workspace in Windows 10 has been enriched with several new features like sticky notes, a sketchpad, and screen sketch. A new ruler has been added that took attention of almost everyone. The ruler can be used to draw lines on the Sketchpad. Even though the layout is quite simple, but the software is not devoid of exciting features. 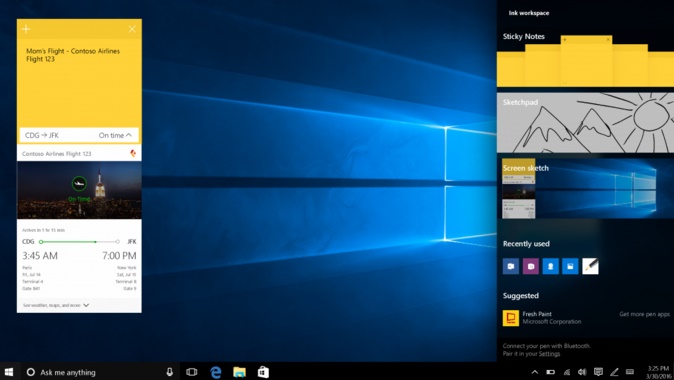 This is truly an all new experience, where a user can enjoy the details of everything they experience while writing with pen and paper. According to survey undertaken by Microsoft, 70% of people or more, spend their time in writing notes and doodles. So, what can be better if the same thing can be incorporated in Windows 10 so that users can scribble their notes on their Windows 10 devices, and that too with poise and ease.

Windows Ink will be integrated into apps like Maps, Microsoft Edge, and Office can unlock the power of Windows 10. Microsoft seems to have decided a brighter future for Windows Ink. “We look forward to making Windows Ink available in the Windows 10 Anniversary Update this summer and expect to see broad adoption of Windows Ink in devices this year. Working closely with our OEM partners, there is strong demand for this innovative technology already”, wrote Microsoft in a blog post.