It has been a long time Microsoft called it quit with the 12 year old Windows XP. While Microsoft wants people to adapt with the new Windows 8 and 8.1 people are still in love with the phenomenal Windows XP. Recent Microsoft announced that it has officially stopped all important security updates for XP users except some special organizations like banks where it has extended service. 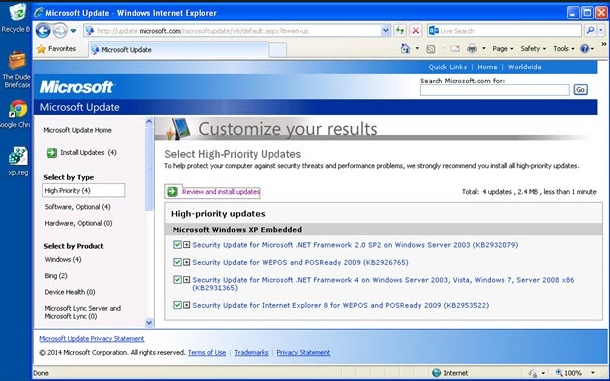 But this has not stopped hackers from making out the curved path. A registry hack was release that was able to receive critical security updates. MICROSOFT has been apprehensive and has straightaway warned users not to use this process to update their Windows XP OS. This registry hack masks the computers from exposing the fact that the machine is still running an officially unsupported OS. This mask will register the computers as using Windows Embedded POS Ready 2009, a version supported until 2019. So once you run the registry hack, you can get the updates.

However Microsoft said in a press conference that this kind of hacks may initially make u happy but in the long run these do harm to your machines and make it attack prone. It’s quite obvious that a company that has officially removed support from an OS will never support any hacks related to it. This strictly goes against the policies and ethical norms of Microsoft.