Microsoft is giving special promotion on Microsoft Store websites. Microsoft last launched a special offer way to buy a new Surface Pro 2 with a free controller and two games. The special promotion is now running exclusively on the Microsoft Store website. This interesting offer lasts upto May 1 or to be clear, till stock lasts. You can get a free Xbox 360 Wireless Controller for Windows if you buy any version of the Surface Pro 2. This spacial pack also offers two new free games, the Farming Stimulator 2013 and the other is free-to-play WWII. In the Farming Simulator 2013, player live out their virtual dreams of maintaining a farm. The WWII warplane themed online game War Thunder. Combined, the controller and the free games normally would cost $104. This deal is only available in the U.S and Canada. 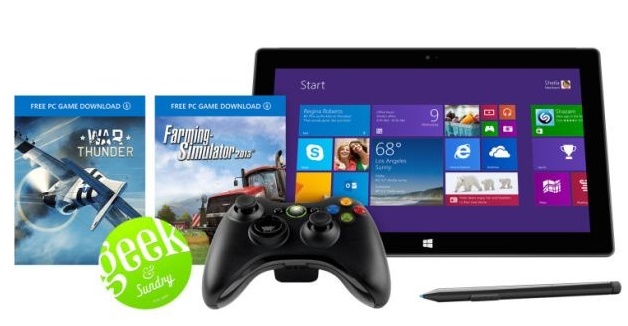 The offer comes as a tie-in to Unplugged, a new gaming themed YouTube series that comes from the popular Geek & Sundry channel. Microsoft is sponsoring the series which features players battling each other in League of Legends while using a Surface Pro 2.