Yesterday we published an article how Microsoft had to pay $10,000 to a Californian woman after an auto upgrade to Windows 10 ruined her computer. After the incident Microsoft has finally acted and improved certain features to calm down the aggressive Windows 10 auto upgrade alert. 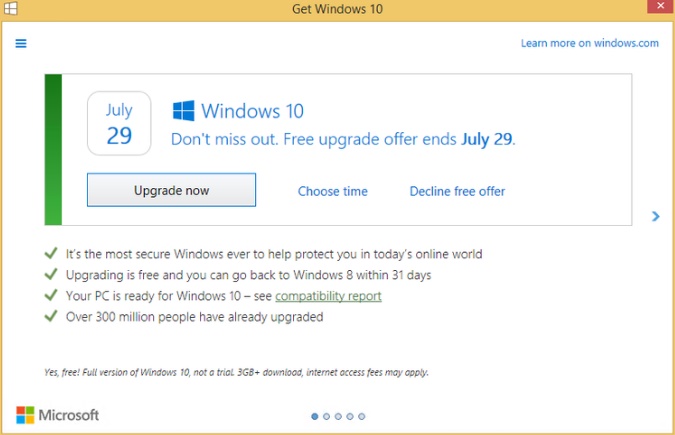 Microsoft is desperate to make every Windows user use Windows 10. For this reason, they have been pishing Windows 10 upgrade alert to all Windows users. When the company found that many users chose not to try Windows 10 and are content with the previous versions, they released a new feature. If you dismiss the using the “Red X” the upgrade would schedule itself anyway. Windows Chief, Terry Myerson admitted that they did push the updates in order to popularize Windows 10. “Since we introduced a new upgrade experience for Windows 10, we’ve received feedback that some of our valued customers found it confusing,” said Myerson. He added,”We’ve been working hard to incorporate their feedback and this week, we’ll roll out a new upgrade experience with clear options to upgrade now, schedule a time, or decline the free offer.”

After the $10,000 payment incident, Microsoft has learn its lesson that the greed to have 1 billion Windows 10 users is not going to work with this kind of oppressive approach. Hence, the company has tweaked the features and now the new prompt includes the ability to “decline free offer” and the “Red X” at the top corner of the dialogue box will no longer initiate the upgrade option.