Lumia camera is a camera application which is available exclusive for Lumia phones. Windows phones were reportedly blamed for their slow camera performance and hence a potentially stable was highly required. To curb this trouble Microsoft has updated all its Lumia handsets with the Lumia Camera app via the Lumia Denim update. 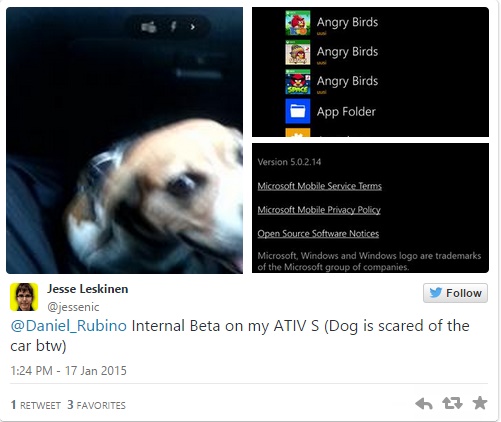 But that does not solve the problem entirely because the exclusive nature of the app refrains it from being accessible from other non-Lumia devices. But it seems situation is changing now. Microsoft is expected to roll out the app for all upcoming Windows 10 phones.

There are numerous conjectures regarding the Windows 10 for Windows Phones. Even the Windows Store has provided a preview of Windows 10 for phones. So there is a decent possibility. A Twitter user named Jesse Leskinen today revealed in Twitter that he has already got the installed on his ATIV S.

The camera application which Jesse installed has the same UI as the Lumia Camera. This indicates that the app could replace the stock camera altogether and that the Lumia Camera app will not be limited to Microsoft’s own devices.

21st January is the day Microsoft invited for announcing the next Chapter of Windows along with the next chapter for Windows Phones as well.