No doubt, the Nano Servers are the future of Cloud Computing and Microsoft is not lagging behind to hop into the latest and most powerful OS beyond Windows Servers. Thanks to the leaked slides, we came to know about the next version of the platform. According to the leaked slides titled Nano Server: The Future of Windows Starts Now posted to a Russian blog by Program Manager Refaat Issa, Nano Server will be the ‘nucleus’ of next generation cloud infrastructure and applications. He is working on ensuring the Manageability of all Windows components and features as a Senior Program Manager on the Windows PowerShell team at Microsoft’s developer site, as described by Channel 9. 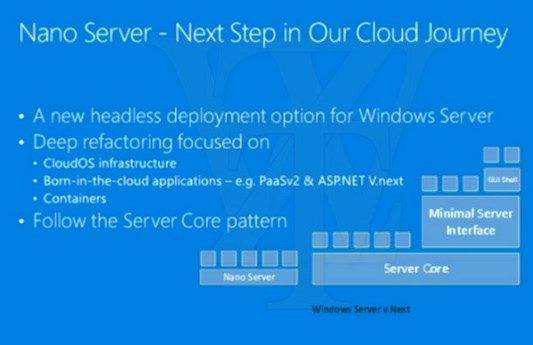 Microsoft has declared a new headless deployment option for Windows Server called Nano Server. That means no need to sit in front of the server to manage it and it supports for cloud computing and many more. Security always being the key concern and every day there are so many records of hackings and security breaches. Apart from this another concerns from the customers are rebooting and large server images take a long time to deploy and consume a lot of network bandwidth. All these concerns bring the Nano Servers in to picture.
Nano Servers have deep refactoring CloudOS infrastructure, cloud applications, and containers. It supports Hyper-V, Clustering, Core CLR, ASP.Net vNext, PaaSv2 and more. “Nano Server” will have Zero-footprint model with server roles and optional features living outside of the platform. It has full driver support and antimalware and can access to remote management/automation via Core PowerShell and WMI. PowerShell Web Access is available for running cmdlets on the end-node from anywhere in the world. 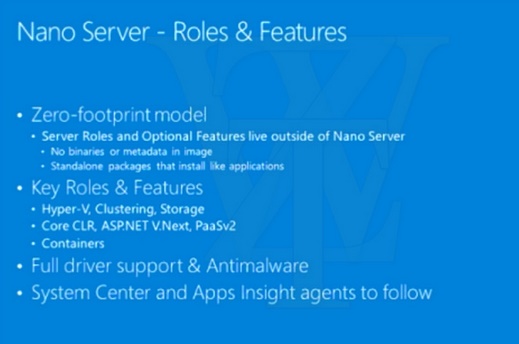 Now the question is when it will get release? We don’t have any news of its release but pretty sure it will be not a part of the next release definitely. Microsoft says that it will reach the limited TAP (Technology Adopters Program) customers in 2015 to have feedback. But we are looking forward for Microsoft to confirm the genuineness of the slides and eagerly waiting for the new era of “Nano Servers”.