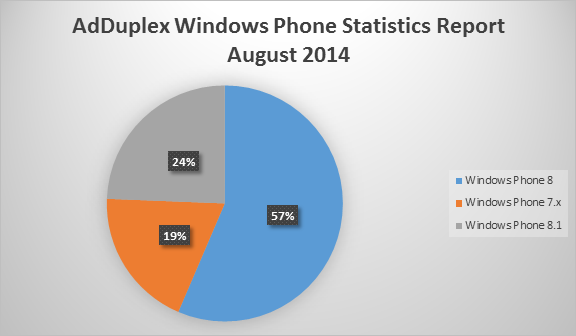 Sale of Windows Phone 8.1 sprang upon greatly after the inception of the digital voice assistant service Cortana in it. The new feature has hugely supported the growing market of Windows Phone 8.1. But the surprising part of the statistics is that still now, a considerable population uses Windows z and Windows 7.x phones,

1. Lumia 630 is gradually ascending the top 10 list in many smartphone markets. Lumia 630 beat Lumia 820 and made a firm position for itself at #8.

3. According to records of AdDuplex, other model specific phone share includes

The report is varied and amusing in the sense that it clearly shows many users are still clung to some old obsolete Windows Phone 7 models which have not received any update since along time. The data analysed here is solely dependent on the usage. AdDuplex collects data from 4,496 Windows Phone apps running AdDuplex SDK v.2. The raw data analyzed on August 25th, 2014 (UTC time) unless otherwise stated.