Microsoft has released the Technical Preview Windows 10 for some Windows Phones. But unfortunately, only few could make it to get the the latest builds. These are Lumia 630, Lumia 635, Lumia 636, Lumia 638, Lumia 730 and Lumia 830. Microsoft brought the new build for the low-end devices which quite naturally infuriated the users of other models. It was quite a disappointment for high end Lumia devices but however. Now as a consequence of this despair, many patch and registry tweaks were launched by tech-geeks that would run Windows 10 on your non-compatible devices. 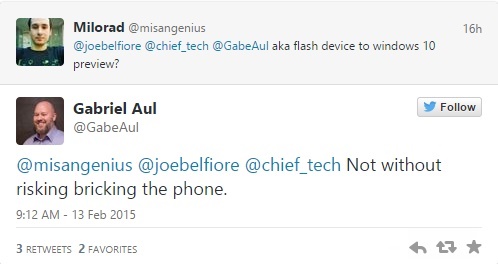 A Polish website even gave some invaluable tips on how to install Windows 10 for other devices, for e.g. Lumia 625. The tutorial published by them clearly shows that the technique is based on tweaks in the Registry Editor. It is required to be sideloaded on an external storage preferably on a SD card. Using the registry editor, users can change the model name, the firmware versions and set the entry the same as that of the phones which are right now compatible for Windows 10 developer preview. Users can register to the Windows Insider program and install Windows 10. So it seems quite easy but it can deceive you mind it.

The alert was tweeted by Gabriel Aul of Microsoft in response to a tweet by another user. Aul said that this technique can led to permanent bricking of your Windows Phones. the screenshot posted above is the original conversation. Have a look. Apart from this warning issued by Aul, we feel there’s nothing to hurry. Microsoft is doing its best to roll the Developer Preview version for other devices quite soon.

You can wait for your turn or try doing this if you want. But beware it can brick your phone. I can’t guarantee you if the process is effective since I am fond of my Lumia 1520 and hence have not tried it.