Microsoft had launched a new app for Windows Phones exclusively for its Lumia range of smartphones. The app is named Gestures Beta app. The Gestures app, as the name suggests will incorporate gesture sensitive operations within a Lumia phone. While you might have started thinking about some great features, but it is not. The features are extremely simple and nothing innovative. Some basic functions like the call management facility has been enhanced. If you check the features, you will see every feature is present in Android or iOS models. 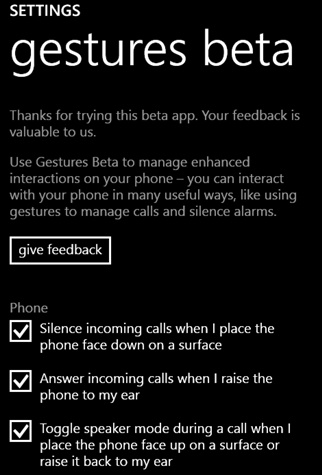 The Beta version has only included call management and phone silent features such as follows:

1. A user can answer a call by just picking up the Lumia phone and setting it with the ear. No touch of buttons will be necessary at all.

2. You can quickly mute your mic during a call in progress by placing the phone on a flat surface with the display facing down.

3. You can silent the ringing of any incoming call by flipping device display down.

4. You can activate speaker for a call in progress by placing the phone on a flat surface with the display facing up.

The features is limited and Lumia 630, 635 and 530 have limited functionality. But this is just the Beta version. We expect Microsoft to include more features in near future.