Minecraft is a very popular and interesting game that deals with fun blocks and monsters. The theme of the game is that the monsters try to kill he protagonist when the player goes out or if the home is not lit properly. Thr objective of the game is ignite the creative lamps of your brain and collect resources in order to march forward. Owing to the popularity and fan vase of the game, it’s updated almost regularly and new types of resources or blocks are added.

Now with a new update, that ameliorated the game to Minecraft 1.10.2 introduced Magma blocks . This version also introduced a new feature called ‘Auto-Jump’. Auto-Jump enables jumping up one block. In previous versions, jump operation was accomplished by hitting the space bar. With the new auto-jump feature, player no longer needs to press the space bar. When the player approaches a block, it automatically hops on to it.

While some users may like the idea of auto jump others may find it annoying. If users feel lazy in tapping the space bar every time, then they must find it useful. On the other hand some users may find it difficult eith sudden loss of control over the jump function. So keeping in mind, the differences in opinion, a provision has been made to turn it on or off. Check out the following steps to turn off Auto Jump in Minecraft.

Steps To Disable Auto-Jump In Minecraft 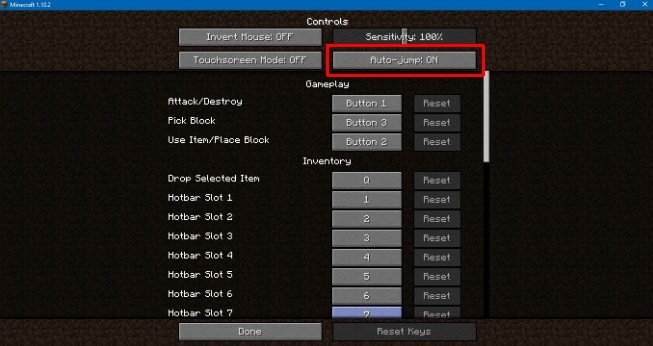 1. First of all, Launch Mineraft and go to the game’s option.

3. At the top of the movement controls, you will find a toggle button for Auto-jump. Tap on it to turn it Off.