Microsoft announced that Desktop App Converter is now available through the Windows Store. The main motive behind this step of Microsoft is to convince more and more developers to port the .NET and Win32 apps to Windows Store. Desktop App Converter deploys a technology known as Desktop Bridge. Previously, this technology was called Project centennial. 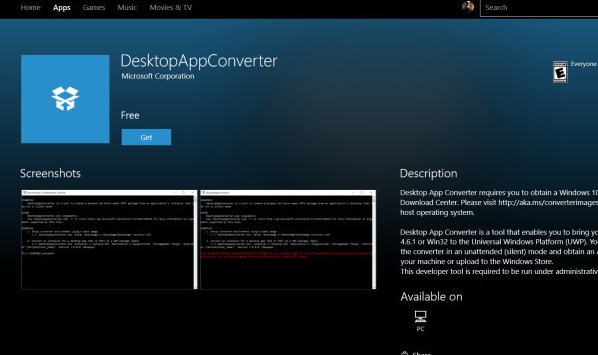 In ablog post, Microsoft stated, “This will enable updates of the Desktop App Converter with the latest features and bug-fixes to automatically be available to you as soon as we release them.
Microsoft also announced that desktop Windows app installers InstallShield, WiX and Advanced Installer all now support the Desktop Bridge tools, “enabling developers to directly build an app package with their existing desktop app using the bridge as part of their existing developer workflow.”

Microsoft is now hopeful about more apps to arrive.

Today we’re pleased to announce that new apps including Evernote, Arduino IDE, Double Twist, PhotoScape, MAGIX Movie Edit Pro, Virtual Robotics Kit, Relab, SQL Pro, Voya Media, Predicted Desire and korAccount will become available in the Windows Store within the next few days for Windows 10 customers running the Anniversary Update. As the apps become available in the Store, you will be able to find them in a full collection of apps built using the Desktop Bridge in the Windows Store.

You can download Desktop App Converter from Windows Store