Apple has allegedly mocked Microsoft’s Windows operating system in its iCloud calender Support page. The page shows a normal window image under the Windows 10 menu. Apple may clarify this as a mistake but committing a mistake by such a highly reputed company is not credible. Microsoft, before launching the final version of Windows 10, showed its arduous effort in designing the Windows 10 desktop screen which was actually a photograph of a real window with real lasers and gases. So, it can be assumed that Apple actually mocked the widely acclaimed Windows 10 Operating system covered with a veil of humor. 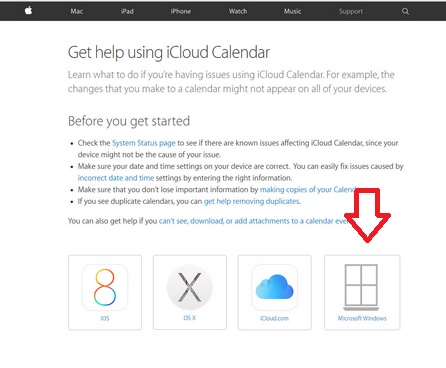 Even though such an error or rather say, a mockery is unlikely for a company like Apple, but this is not the first time! There have been several times when Microsoft and Apple indulged in taunts and sarcasm. Even Microsoft had derided many a times, the videos by Apple.

Few days back, Apple CEO Tim Cook said that they are planning to take further the partnership with Microsoft one step further for the benefits of their users. Just after an announcement by the CEO himself, such an activity by Apple indicates that no matter what partnerships are building up, two foes can never be friends.