The Windows Phone 8.x based devices are going to get some competition with its counterparts since more mobile based companies are producing Windows phones and Alcatel is no such exception. 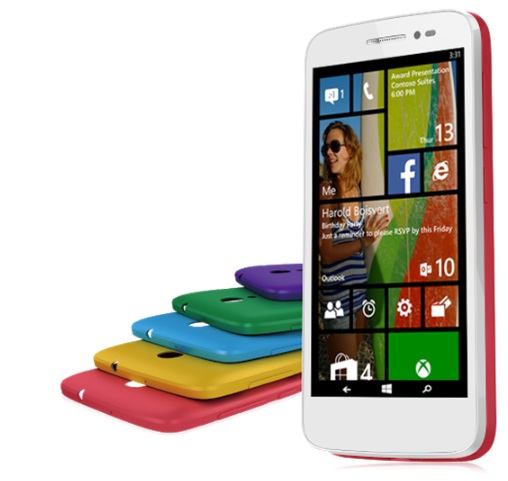 The company which launched a Windows 7.8 phone towards the end of 2012 got off the track soon to focus extensively on its Android devices. But now they are back with the first ever 64 bit Windows Phone. This phone has the same specifications as Alcatel One Touch POP 2 Android phone has. So basically Alcatel has taken the same strategy as HTC (same specifications for HTC One and HTC One for Windows). It will be one of the first windows phones to use Qualcomm’s Snapdragon 410 chip.

The device is almost identical to its Android equivalent with the only difference being in the placement of buttons. The hardware buttons present in the Android based device is removed and replaced by on-screen Back, Start and Search ‘soft buttons’ on the Windows based phone.

Its other specifications include a 4.5 inch FWVGA display, 1 GB RAM with 8 GB storage with a support for microSD card slot. The camera is a 5 MegaPixel rear camera with LED flash and comes with a VGA front facing camera. It also supports 4G LTE connectivity and battery power is 2000 mAh.

The device is expected to be priced at $159 and will come with the latest version of the Windows mobile OS, Windows 8.1.

App Maintenance: Here’s Why You Should Be Doing It