AdDuplex is a very popular organization that surveys on Phones, OS usage every month. The results are based on its network and the estimation is made over a period of 24 hours. A survey on 20th July revealed that Windows 10 Mobile is available on 11.9 % Windows Phones. 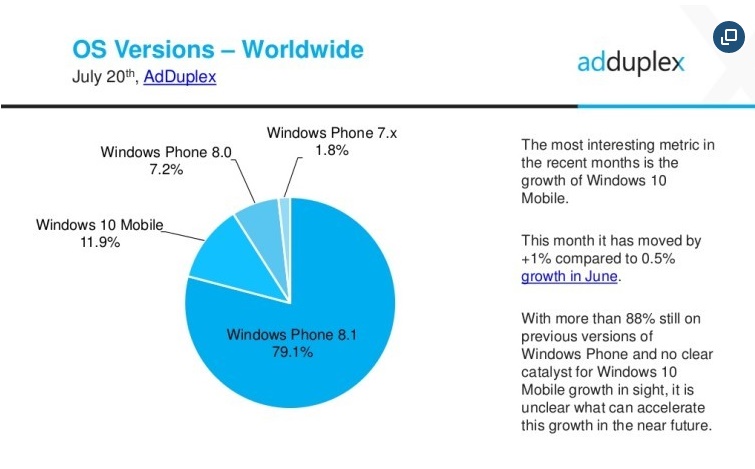 Microsoft has been ameliorating the new mobile OS since ages and is still pushing updates on both fast ring and slow ring. Even though there has been an increase of 1 % compared to June, but still it’s just 11.9 % which us not sufficient. Windows Phone 8.1 share also increased very slightly, from 78.8% last month up to 79.1%.

The survey by AdDuplex shows a declining Windows Phone 7.x and probably users moved to a different platform because there has not been sufficient increase in shares of newer Windows Phone versions. Microsoft recently revealed that it is dropping Skype support for Windows Phone 8 and 8.1 handsets.This decision will definitely cost the platform. Microsoft said that it wants as the company says it wants to invest on Skype for iOS, Android and Windows 10 Mobile. Since, Windows 10 Mobile is not yet stable and doesn’t have major apps compard to iOS and Android, it’s likely that users may shift to Android and iOS.