Windows 10 Technical Preview has added two new features in the desktop interface- one is the virtual desktop and the other one is the Search option. Virtual desktop helps you in handling multi-tasking. You can tap on the button and create new virtual desktops. You can also move apps opened in one desktop to another. So this feature is useful. You can find more details in our tutorial on Virtual Desktop
. 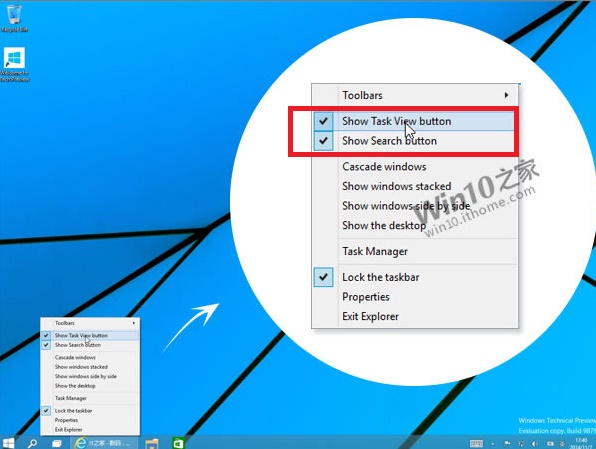 Now coming to the Search option, Windows 10 has revamped this feature in a noble way. Since you no more require to hover to a charms bar and then enter a new window, searching from the desktop has become so easy. Even this feature is useful. But still you may not require to use these features. The present Technical Preview does not allow you to remove them from your Taskbar. This is probably Microsoft wants you to gt accustomed with these features but now the good news is that there has been a news circulating that the upcoming version of Windows 10 is going to add this feature.

This makes sense as despite of its utility, you might not require them and there is no point in unnecessary consumption of the limited space of the Taskbar. The image given is one of the screenshots from build 9879. The image clearly shows the option where you can enable or disable these two features. This feature is highly expected in he upcoming builds but this is not a confirmed news yet because the build has not been distributed to the core testing groups that are the last to receive the build before it is released to the Insiders program. This build still could be the next release but the steps taken to release 9841 and 9860 have not occurred internally (yet) to make this build available to everyone.