Windows Phone App Store gets another image editor called Rawer. While this may not enthusiast many readers as there are many photo editors already present in the store but there are a few features in the app which distinguishes from others in the marketplace. 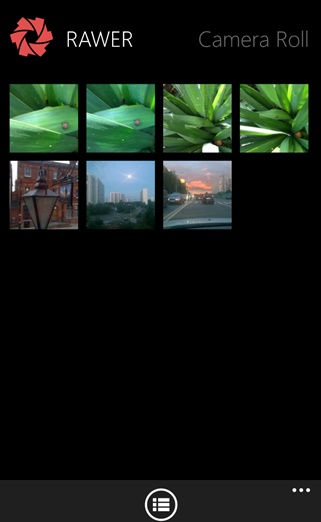 The Rawer app not only opens images taken from a high resolution Lumia camera such as 1020, 1520, 930, etc. but it can also open many RAW images taken from a DSLR camera. Thus it will certainly appeal to those who are keen on experimenting with RAW image files. Moreover the app has got the ability to check for the image EXIF information, i.e., the image metadata such as the camera settings information, location, date and time of where the image was taken. The app also has OneDrive support to it.

With Rawer it allows you to process the RAW image file by making some adjustments, fine tuning it and save the final product in a JPEG format. RAW image files are minimally processed data from the image sensor of a camera. They are named such because they are not processed and only after making adjustments to it, it is saved in a JPEG or TIFF format for printing or storage purposes.

At first launch of the app, it searches your phone for any raw image files, DNG files in case of Lumia files, and brings them together at one place. And then you can apply any effects to your pictures:

1. By turning on or off the noise reduction
2. By turning on or off auto brightness
3. By using White balance settings to images
4. By sizing the image to half for quick processing
Though Rawer app is free to download but it shows a message for in-app purchase for the tools which is priced at $3.5 but for the week from 20-09 to 27-09 the price is dropped to $1.

You can download the app from Windows Phone Store