Microsoft is not a new name in the field of autonomous or self driving car. The Redmond giant has been investing and deploying its skills in developing dashboard technologies for cars since many years. Now Microsoft, in collaboration with IAV, is delving into something new that can revolutionize self-driving cars. The self driving car, in process is called The Connected Highly Automated Driving vehicle or CHAD. 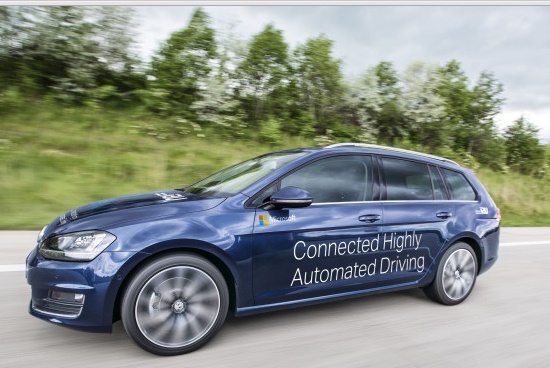 The best things about CHAD is that it can interact with other devices especially Microsoft Bands, smartwatches and smartphones and keep track of all the vehicles and the pedestrians ensuring the safety of both. The self driving cars usually rely on camera. This means when an an object is obstructed by any big object, then the self-driving car won’t be able to find it. However this is not the case for this one. A demonstration was given in which a pedestrian was standing behind a parked car. When the self driving car was approaching, it could not detect any object with its camera, but detected the hidden pedestrian with the aid of the smartphone or Microsoft Band possessed by the pedestrian. The car could sense an object in that particular location and hence slowed down its motion.

This technology is called V2X which implies to a vehicle communicating with x number of external devices. The external things can be smartphones, IoT (Internet of Things) devices embedded in the road or stop signs, wearables on pedestrians or any other self-driving car on the road. Microsoft and IAV cars have already traveled more than 70.000 kilometers, that’s 43,000 miles, across Europe and the US and have successfully passed the tests. Now,let’s wait and watch when the self-driving car arrives the market.